This month's parent, Kristen, is the mother of four, ages 13, 11, 8, and 5. Eleven-year-old Vincent is hard of hearing.  Kristen writes a lovely blog called Mothering Mayhem where she records memories of time spent with her children.


My son was born in 1999, right after the newborn screening program was started in Virginia hospitals. At birth, one of my son's ears failed the newborn hearing screening and the other one passed. Because we had no family history of hearing loss, the hospital suggested that the failure was most likely due to fluid in his ear from the birth process.


Because of the relaxed attitude by the doctors, who brushed off the hearing test results, we weren't concerned about his ear failing the screening. We were told that even if he did have hearing loss in that one ear, the only considerations he would receive would be preferential seating in school.


I took our son to an audiologist at Children's Hospital many times for hearing tests, but he was a colicky baby and a poor sleeper. He always awoke before the end of the test.


At twelve months old, in a last ditch attempt to get conclusive test results, he was sedated for a BAER test at Children's Hospital in Washington, DC. We were shocked when the test results showed a severe mixed conductive hearing loss in both ears.

At 15 months old, Vincent started wearing his first pair of hearing aids. He loved them right from the start. He never pulled them out in frustration.


When our son was younger, my husband and I were so worried about his future. We stressed and fought with the school for services. We went to classes and seminars. We basically freaked out that his classrooms weren't acoustically perfect.


That was a very bleak time.


We spent so much energy fighting. Life improved after we decided to focus on giving Vincent everything he needed ourselves. He still went to school, but we would do homework together everyday. I could make sure he knew what he was doing and didn't get behind.


Vincent's hearing loss is progressive. For years, his hearing worsened quite a bit. Sometimes there would be a slight improvement, but the overall trend was always downward. After consulting many specialists, we were told that the fluctuations were not a good sign. Vincent would become totally deaf eventually.


For a while I was overwhelmingly sad about his prognosis. I wondered if it would have been easier for him to have been born deaf, rather than going through another period of adjustment (most likely) in his teens.


Vincent has had two ear surgeries in an attempt to stop the progression. The surgeries appear to have stabilized his hearing for the time being, but the future is unclear.


As two hearing parents, we chose to aid our son because his loss still allowed the use of hearing aids and we thought communicating via speech would make his life easier. We made the decision that we thought was right for him. Had we known then that he would eventually lose all of his hearing, we probably would have chosen an alternate route. If his hearing does worsen, now that he is older, he will have a choice about cochlear implants, sign language, or both.


Thanks for telling your story here, Kristen!  There are so many different kinds of hearing loss and many ways to come to a diagnosis.  I wish you strength moving forward as you continue to advocate for Vincent's changing needs.


If you are interested in being a featured parent or have a personal experience with growing up deaf or hard of hearing, please email me at bigteethclouds at gmail dot com.
Posted by Joey Lynn Resciniti at 6:00 AM No comments:

Making an equipment snafu a bright spot in parenting

The school has me on speed dial. They call me to work there. They call with horrible news. They call when I forget to put on the FM boots.

On Tuesday, they called because through some strange series of events Julia lost an FM receiver on the floor of the classroom.

We have our very own FM system and receivers at home. The teacher wanted me to bring one of ours to the school so they could go on with their day. They were already operating on an ice storm induced two hour delay schedule.

In the six minutes it took to get to the school, I had a really bright idea. Julia has been having a difficult winter with her hearing aids. She's been complaining that they hurt her. One day she came home with a note from the hearing teacher. "FYI- Julia's ear was bleeding today," it said.

This is all because her ear canals are very dry. We've been applying oto ease, a hearing aid lubricant, in the morning in an attempt to moisturize her skin. It helps a little.

We hypothesized that all of this might go better if she didn't have to take her hearing aids out at least twice every school day. The powers that be insist that the FM receivers must stay at school. Julia has to take her aids out to put the receivers on each morning and take them off each afternoon.

My new bright idea is to send her back and forth already wearing our receivers from home. The school provided receivers can stay at school. In fact, one of them is busy hiding somewhere on the floor right now*.

Why didn't I think of this sooner?


*The receiver was located later in the day. We're still going to try using the equipment from home. Hopefully, her ears will heal if the aids are in and out less.
Posted by Joey Lynn Resciniti at 6:00 AM No comments:

By the time we headed to our usual audiologist for tests to confirm the additional loss found at last month's ENT appointment, Julia was sneezing and sniffling.

In spite of being pretty congested, the tympanogram revealed only slight negative pressure. That means that her hear drums were still moving. Good news.

In the booth, Julia struggled with a word recognition task. I sat behind her and listened to her garbled attempts at repeating the audiologist's list of words. As usual, I tried to piece together Julia's behavior and the audiologist's face to guess at how it was going.

I still can't figure it out.

We have to go back in May. Hopefully, then her congestion will be cleared up. If her slushy speech doesn't right itself in a timely fashion, we'll be going back to the ENT or pediatrician. Sinuses and adenoids might be making her head stuffy.

Though it's good to think that this isn't further progression of the sensorineural hearing loss, she's still hearing worse today than she was six months ago. As with all things related to hearing loss, it seems there's just more we don't know. The only thing that's certain is that we're looking forward to spring.
Posted by Joey Lynn Resciniti at 6:00 AM No comments:

Email ThisBlogThis!Share to TwitterShare to FacebookShare to Pinterest
Labels: parenting a child with hearing loss

Cue Camp as an incentive

Cue Camp Friendship is happening this June in Maryland. I am determined to help Julia understand cued speech before swimming pool season. Cue camp would be a good opportunity to help Tim and I gain speed and teach Julia. It's getting harder to communicate without hearing aids. We have to do something.

Last summer's AG Bell Convention is burned into dear Julia's memory. It turns out she didn't like the kid program. When I mentioned going to SeaWorld next time we're in Orlando, she said, "I'm not going on that bus again!" In her mind SeaWorld is only accessible with a bus load of strangers (day care workers and other children in the AG Bell kid program). I didn't realize it was going to traumatize her!

After explaining that Mommy and Daddy would go with her, she's on board for any hypothetical  visit to an Orlando attraction.

Separating from us for any portion of a vacation is getting a big thumb's down, so I have attempted to make a bargain. If we can learn to cue enough to get by for a day at the beach by May, we won't go to Cue Camp. If we don't learn it, we'll give up three days of our vacation and some of our togetherness.

All parties have agreed to these terms. We haven't practiced even once. I'm keeping the Cue Camp registration form close by!
Posted by Joey Lynn Resciniti at 6:00 AM No comments:

Email ThisBlogThis!Share to TwitterShare to FacebookShare to Pinterest
Labels: parenting a child with hearing loss

Taking it one decibel at a time

Late last month, Tim insisted that I take Julia somewhere to figure out what's going on with her hearing. She's been a bit off lately, mishearing and dropping some sounds she'd previously conquered. I made lots of excuses. She's tired in the evenings. She's congested. She'll do better after cold and flu season is over.

The Dad wasn't interested in excuses, so I emailed the audiologist. We determined it would be best to make an appointment with the ENT. Dr. C. could check for fluid. They can do a hearing test at the same time to determine the impact of the congestion/fluid.

After almost two hours Dr. C. and a different audiologist than our regular one determined that there is no fluid in Julia's ears. There's no ear wax. Their testing revealed more hearing lost. 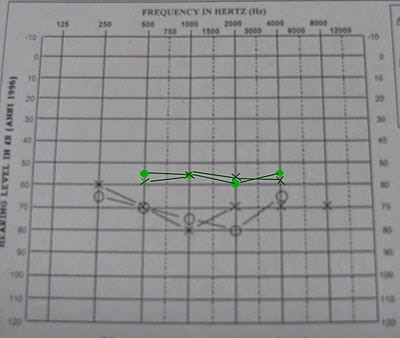 The black x's and o's are the results from the most recent test. Those green ones are where we started when Julia's hearing loss was first discovered. It started as a 55 dB loss. Now there are marks at the 80 dB line.

Honestly, I've still been waiting for the last 15 dBs lost to come back. I figure there's always a chance of a bad test or some incalculable stuffiness that caused things to be a bit different. It hasn't come back.

Dr. C. was genuinely apologetic that there was no wax ball he could clear. I made an appointment with our regular audiologist (January 12th) to have another test. If these results are confirmed, Julia's hearing aids will be reprogrammed and I'll try to program my mind to say "severe hearing loss" rather than "moderate."

Until the next test, there's still hope. This test was at the end of a long day. Maybe she was just tired.
Posted by Joey Lynn Resciniti at 6:00 AM No comments: