We were in a good place using Julia's Phonak iCom. Such a good place, I wrote a nice review of it.

For weeks, I powered on the iCom via it's small round button and handed it to Julia. She would watch movies or play games on her iPod as the sound played right into her hearing aids. Tim and I could listen to music or even talk to one another on long car rides. It was bliss. 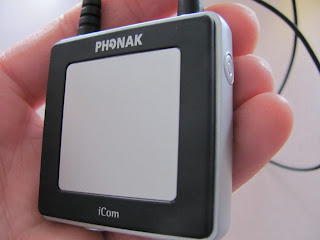 Then we heard, "MOM-eee. My iCom's not WORKing!"

I achieved this response after hundreds of attempts to fix her setup while not being able to verify whether or not success had been achieved. I tried to tap the power button and press the large square front button in just the right order. Julia would try to give thumbs up or thumbs down to let me know if the sound-only-she-could-hear was playing. Apparently the iCom can work for two seconds and then cut out. This resulted in the dreaded spinning thumb of indecision.

We went back to the 3.5mm cord thinking that the Bluetooth connection was acting up. There are solar flares, my husband says. Or maybe too many i's.

The 3.5mm cord plugs into the headphone jack of the iPod reducing finicky wireless connections. It worked for a little while before my child's bellowing call of "MOMMEEEE" awakened me from my turnpike trance. Maybe there's something wrong with the iCom's ability to communicate with the hearing aids. Maybe the iCom was just too good to be true.

We'll ask the audiologist, but until then... iFrustrated!
Posted by Joey Lynn Resciniti at 10:14 AM