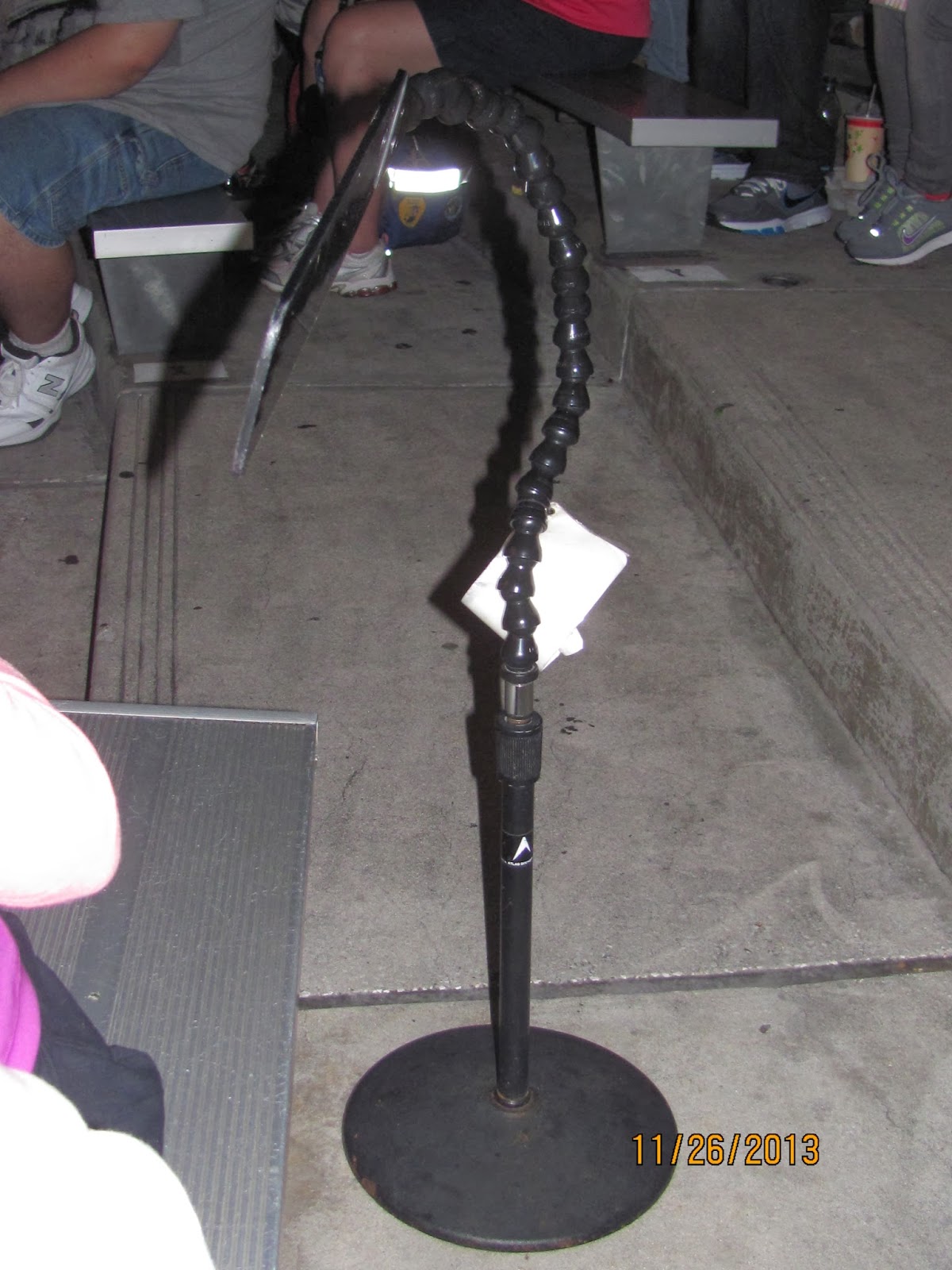 Thanksgiving 2013 found our family crossing something off of my personal bucket list: Disney at Christmas. Ever since seeing an HGTV special on decorating the Magic Kingdom, I've wanted to go there. It was amazing! The castle covered in white lights was everything I dreamed it would be.

But there's only so long you can bask in the glow of Cinderella's castle. We spent time visiting other Orlando attractions as well as Hollywood Studios. It was there that we saw Fantasmic (billed as a "nighttime extravaganza") for the first time.

Using a combination of park maps and apps, we found that Fantasmic offers reflective captioning during the performance. We inquired at the entrance and were personally escorted by a staff member that set us up with the device. 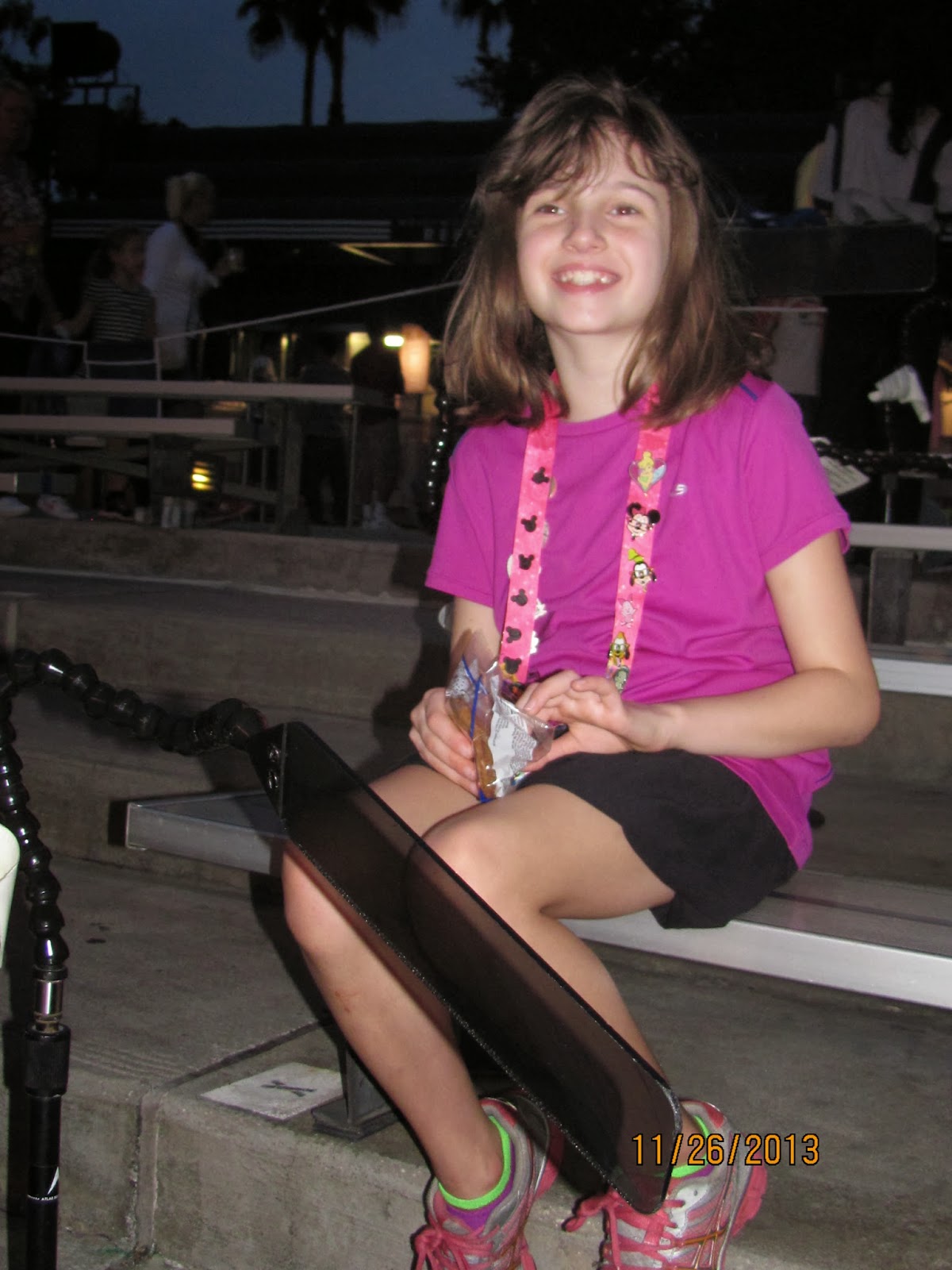 Reflective captioning uses an acrylic glass panel to reflect the captions which are displayed (backwards of course) on a digital sign at the back of the amphitheater. We were seated in the "Mickey Mouse" section which was directly in front of the captioning display. Unfortunately, the staff member told us that we had to sit at the far end of the row. This placed a large pole between us and the caption display. Understanding, as we do, that a reflection requires a clear view of the thing you mean to reflect (you can't see your face in a mirror if your hand is in the way), we were skeptical. We had to wait to get it set up though because leading up to the show the screen was completely blank.

Once the show started, we scrambled to align the glass with the screen. We had to shift down the row to get that pole out of the way. It was a bit difficult as a parent because the reflection was only visible for our daughter. Sitting next to her it looked completely blank. It was a touch stressful!

After proper alignment was achieved, it worked wonderfully. Julia was able to understand parts of the show that were even a bit too garbled for her typically hearing parents. I heard Tim ask, "what did she say?" once during the show. Julia knew.

The next day in the Magic Kingdom, we again used reflective captioning for Mickey's PhilharMagic. We were again seated on the end of a row which put us in rather terrible seats for the 3D show. Once again, the screen was blank up until the show started. We hurried to set it up once the show began.

All in all, the reflective captioning was a great benefit for these shows. I'm not sure any of us are meant to understand Donald Duck, but according to the captions he is saying real words. My main suggestion to Disney would be to have a clear line of sight between the guest's seats and the caption screen. Also, it would be great if the screen could display something, even just an asterisk, to be lined up before the show starts. It's Disney magic - we don't want to miss a second!

A complete list of Disney's hearing services shows that they also offer handheld captioning devices. I'm a bit bummed we didn't know about that at the time. We'll definitely give that a try next time!
Posted by Joey Lynn Resciniti at 11:51 AM