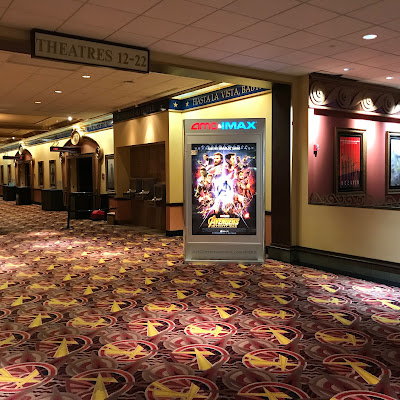 Periodic announcements make their way to us with a schedule of "open captioned" movies at a Pittsburgh-area theater, the AMC Waterfront 22. The Waterfront isn't very close to our home, nor is it a place we enjoy spending time. And the movie offerings haven't been too alluring. We don't partake of the cinema very often due to other people and lack of captions. (Closed caption devices tend to ruin the movie.)

Then came an announcement for Avengers: Infinity War with open captions.

After taking in every Marvel movie (with the exception of Black Panther, still working on that one), I figured the new Avengers movie was a film worth seeing in the theater, even if it meant a 45-minute drive early-ish on a Saturday morning.

The open captioned show times do not occur midday.

Infinity War has not been on my radar. Honestly, the superhero thing has been wearing itself out. Ever since Civil War and Ragnarok, they haven't been as exciting. So it was mostly the captions that brought me out of our home theater. At 10am on a Saturday, I figured there wouldn't be many other people. It might have been the perfect outing.

Except that it was opening weekend for a blockbuster film. I still can't believe they open caption on opening weekend. That's pretty cool when you think about it. The theater was remarkably busy, the feature film's captions were perfection and it was, in fact, Avengers: Infinity War was the ultimate superhero crossover event of all time.

There are just a couple of notes I'd like to pass along to the AMC.

Overall, this was one of the best movie theater experiences we've had. If it was up to me, there wouldn't even be an extended period of "front row" screen facetime extra report madness before seventeen previews, but that's the price you pay for seeing a film in the theater. (Other than the price of admission.) But if there has to be a Coke commercial, figure out how to caption it. Then, going to the movies might really be perfect.
Posted by Joey Lynn Resciniti at 2:41 PM